Use this visual chart to help your child memorise the alphabet. This is also great to use as a copy sheet for letter formation.

Visual representations are important to help kids associate abstract concepts (like letters) to the real world. Our free alphabet letter chart was created to help with this. It has uppercase, lowercase, and both along with a picture that kids will easily recognize.

The best part? You can change the font on this free printable! That means that you can swap out the simple letters with traceable ones for writing practice or even cursive letters.

How to Use This Free Alphabet Letter Chart With Customizable Fonts

It goes without saying that you can print it out as-is. There are six different versions of the printable (two sets of three with blue or green borders). Hang it up in your child’s play area, a daycare, classroom to help expose young kids to the alphabet.

You can also use it as a visual guide as you run through the alphabet with toddlers and preschoolers.

Since the font is customizable, you can replace the simple letters with cursive for older kids.

Most kids learn their uppercase alphabet before the lowercase letters, but it’s important to introduce both as soon as possible. You can print out all three alphabet letter charts to show kids that both the uppercase and lowercase versions of each letter represent the same thing.

Use the pictures to help kids practice their letter sounds, and associate those sounds with the correct letter. For younger kids can go through the chart saying the sounds instead of letters. Then start asking them to identify letters based on a sound.

This alphabet letter chart can be customized with any font, so you can also use it for letter writing. Choose dotted letters or ones with the arrows for kids to trace.

You can also change it to cursive to practice handwriting letters instead.

Toddlers who are too young to memorize letters can work on learning the words for the pictures on this chart instead. It can also help speech development to practice saying different letter sounds.

Other Ways to Use This Free Alphabet Letter Chart:

This one is simple; say a letter and have kids try and find it on the chart.

This one is really fun for preschoolers. Print out one chart for each child playing, and an extra one for yourself. Cut out each letter on your sheet and mix them up.

Draw one letter at a time and show it to the kids while saying the letter. Then have kids use a bingo dabber or sticker to cover it up. See who can find their letter first!

Cut out each letter of the chart like a puzzle, then have your child assemble it. You can also mix up the letters and have them line them up in order.

How to Teach Kids the Alphabet

Remember that young children primarily learn through play, so do your best to make practicing their ABCs fun. That means playing games, singing songs, and exposing kids to their letters in a variety of ways. 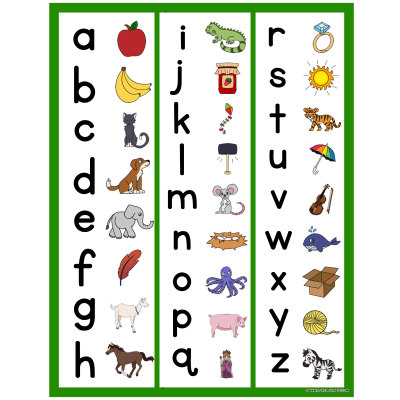 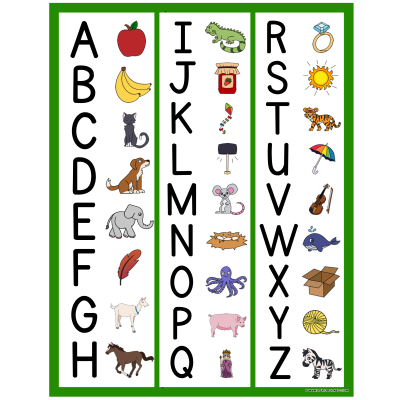 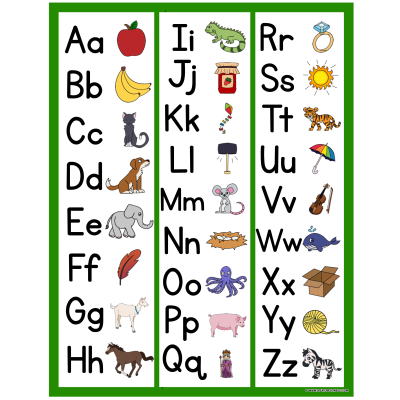 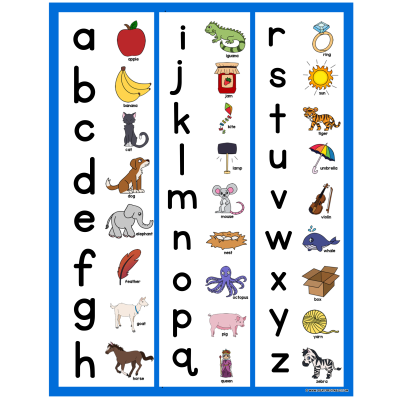 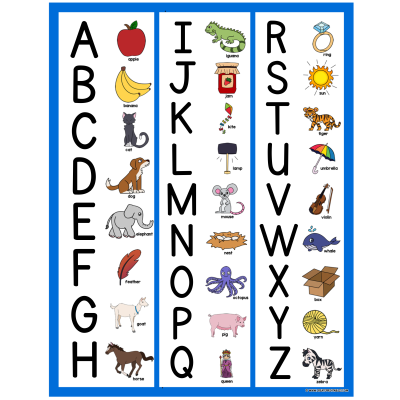