Look, trace then copy the entire alphabet! This is perfect for beginners who need help with letter formation.

This alphabet look trace copy worksheet helps build three important skills for young kids. Letter recognition is first, with the letter written whole. Second there is letter tracing, and finally the child can attempt the letter on their own.

Worksheets like this are great writing practice for kids because it focuses on the foundation of proper letter formation rather than just repeated tracing or writing.

The worksheet is fully customizable so you can pick the fonts that work best for your child’s learning style and skill level. Both the solid and tracing fonts can be changed out separately, too.

There’s an old saying that repetition is the mother of study, and nothing can be more true for rote learning tasks like the alphabet. Letters are abstract to young kids. It isn’t until they’re reading and spelling more that they start to make sense, so how do you teach letters to kids?

If you’ve ever studied something with flash cards you know that isn’t always enough to learn something. The same goes for kids - the human brain actually remembers information better if it’s written down.

That's why writing worksheets are useful for early learners.

A Chance to Fix Mistakes

It’s easy for kids to pick up bad habits when it comes to letter formation. If not corrected early on, they can be a challenge for later. That’s why having an example of what the letter should look like right next to where they’re writing is so important.

Another thing with kids is sometimes when doing letter repetitions they get bored or try to rush through. That can lead to improper letter formation and in that situation can be unhelpful for developing skills.

Used as a Test

Speaking of mistakes, this worksheet can also be used as a testing tool. Have the child complete the worksheet in either uppercase or both upper and lower case, then identify which letters they need some extra help with.

As an Uppercase and Lowercase Letter Worksheet

After learning their letters kids need to understand the relationship between upper and lowercase letters. This is something that most kids struggle with early on. It should be developing through kindergarten and first grade.

To reinforce this, have them complete the upper and lower case worksheets side by side.

Take advantage of the font options to turn this into a cursive alphabet look trace copy worksheet. This is a great way to practice (most kids find handwriting a bit tricky), or to teach your kids at home.

You could also customize the worksheet so your first letter is a printed font, and the second is the D’Nealian cursive font to practice cursive letter recognition.

More alphabet worksheets to use: 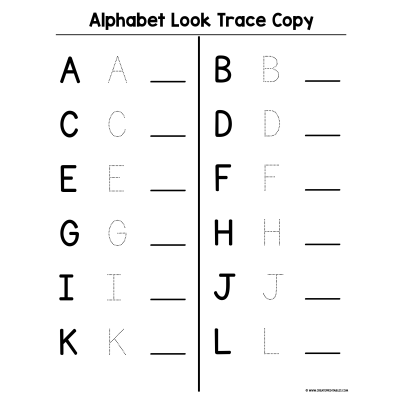 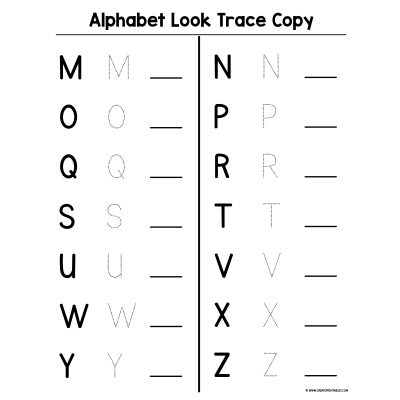 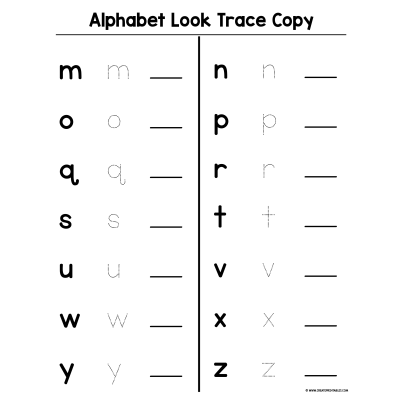